What the Difference Between Computer SSD vs HDD

Welcome to our SSD vs HDD guide, where we’ll look at the pros and cons of traditional hard drives (HDD) and solid state drives (SSD) to help you choose which one is the best for your needs in life.
When you’re looking to buy a new computer or laptop, or if you’re researching ways to upgrade your machine, you’ll see a lot of references to both hard drives and SSDs, but which one is best for you?If you have to pick just one, though, how do you choose? Let’s get into the differences between SSDs and HDDs, and walk you through the advantages and disadvantages of each to help you decide. 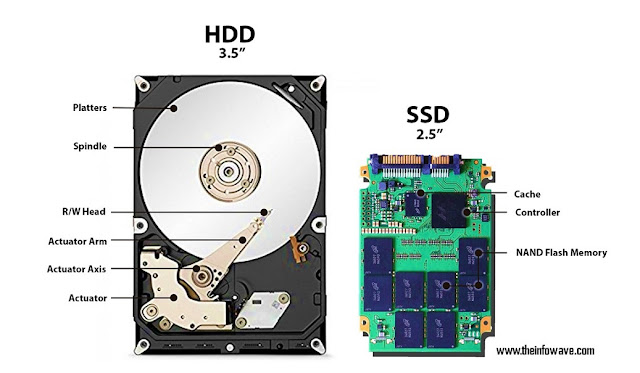 How SSD and HDD Explained :

An SSD does functionally everything a hard drive does, but data is instead stored on interconnected flash-memory chips that retain the data even when there’s no power present. These flash chips are of a different type than the kind used in USB thumb drives, and are typically faster and more reliable. SSDs are consequently more expensive than USB thumb drives of the same capacities. Like thumb drives, though, they’re often much smaller than HDDs and therefore offer manufacturers more flexibility in designing a PC. While they can take the place of traditional 2.5-inch or 3.5-inch hard drive bays, they can also be installed in a PCI Express expansion slot or even be mounted directly on the motherboard, a configuration that’s now common in high-end laptops and all-in-ones. (These board-mounted SSDs use a form factor known as M.2. See our picks for the best M.2 SSDs.)
The traditional spinning hard drive is the basic non-volatile storage on a computer. That is, information on it doesn’t “go away” when you turn off the system, unlike data stored in RAM. A hard drive is essentially a metal platter with a magnetic coating that stores your data, whether weather reports from the last century, a high-definition copy of the original Star Wars trilogy, or your digital music collection. A read/write head on an arm accesses the data while the platters are spinning.

What is Hard Disk Drive (HDD)? 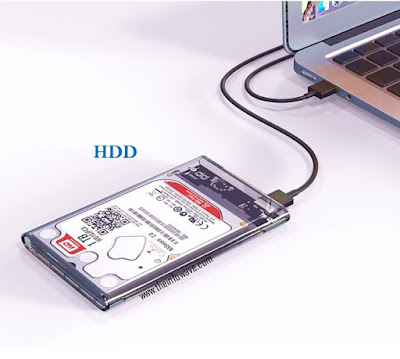 If you buy a desktop PC it will most likely have a traditional hard disk drive, on which the operating system, along with any applications you install, and your files and folders, are stored.
A traditional hard drive contains a circular disc known as a platter that stores your data. The disc spins, allowing the read-write arm to read data on the disc or write data to it as it passes.
The faster the platter spins, the faster the hard drive works, which can impact how quickly your operating system responds, and how long it takes applications installed on the drive to load and open.

Older hard drives use an IDE port to connect to the motherboard of a PC, but most modern hard drives use a SATA connection. The most recent version of SATA, SATA III, is found on modern motherboards, and enables the fastest possible data transfers for a HDD.Hard drive technology is relatively ancient (in terms of computer history, anyway). There are well-known photos of the IBM 650 RAMAC hard drive from 1956 that used 50 24-inch-wide platters to hold a whopping 3.75MB of storage space. This, of course, is the size of an average 128Kbps MP3 file today, in the physical space that could hold two commercial refrigerators. The RAMAC 350 was limited to government and industrial uses, and it was obsolete by 1969.

What is a Solid State Drive (SSD)? 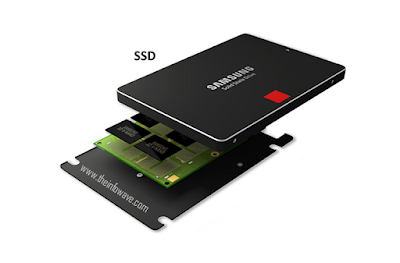 SSD is newer storage technology, but it’s still been around for a while now, and if you have a modern laptop or PC, it’s likely that it uses an SSD.
As the name suggests, an SSD  unlike a traditional hard drive  has no moving parts. Instead, it uses NAND flash memory. The more NAND (Negative-AND) memory chips an SSD has the more storage capacity and fast it has. Modern technology allows SSDs to have more NAND chips than ever, which means SSDs can have capacities similar to HDDs.

Many SSDs come with SATA III ports, which means they can be easily installed in place of a HDD, and many also come in the 2.5-inch format that smaller hard drives also come in. However, the maximum data throughput of SATA III is 600MB/s, and while this is fine for HDDs, SDDs are capable of much faster speeds, which means if you have an SSD with a SATA III connection, the drive’s performance is actually being held back by its SATA connection.
The SSD has a much shorter history. There has always been an infatuation with nonmoving storage from the beginning of personal computing, with technologies like bubble memory flashing (pun intended) and dying in the 1970s and 1980s. Current flash memory is the logical extension of the same idea, as it doesn’t require constant power to retain the data you store on it. The first primary drives that we know as SSDs started during the rise of netbooks in the late 2000s. In 2007, the OLPC XO-1 used a 1GB SSD, and the Asus Eee PC 700 series used a 2GB SSD as primary storage. The SSD chips on low-end Eee PC units and the XO-1 were permanently soldered to the motherboard.

SSD and HDD speeds are measured in MB/s (megabytes per second) for both read (how fast the drive can read data) and write (how fast data can be written to the drive).
There are other factors in play that determine HDD speeds, such as capacity, but in general a SATA III hard drive at 5,400 RPM will have speeds of around 100MB/s, while a 7,200 RPM will be 150MB/s.
First, let’s look at HDD speeds. Because these drives using a spinning platter, the speed of the drive is largely dependent on the RPM (revolutions per minute) the drive is capable of – and the higher the RPM, the faster the drive can perform. Many budget hard drives have an RPM of 5,400 RPM, which is the slowest speed modern hard drives are capable of – you’re better off going for a drive that can achieve 7,200 RPM, which is what most modern HDDs will be rated at .You can get higher-RPM drives, up to 10,000 RPM and even higher, but these are rarer and more expensive.

A solid state drive with a SATA III connection should achieve around 550MB/s read and 520MB/s write speeds, though some will be faster – but will max out at 600MB/s.

So, even with a SATA III connection, which limits the speed of SSDs, you’re getting around four times the speed of traditional hard drives. However, if you use one of the better-optimized connections for SSDs, the speed difference really opens up.

Average speeds for PCIe/M.2 SSDs range from around 1.2GB/s up to around 1.4GB/s – and if you’ve got the budget there are even some that can reach 2.2GB/s.


So, you’re looking at around 10 times the speed if you go for one of these SSDs. When it comes to speed and performance, SSDs are definitely the way to go.

Speed: This is where SSDs shine. An SSD-equipped PC will boot in less than a minute, and often in just seconds. A hard drive requires time to speed up to operating specs, and it will continue to be slower than an SSD during normal use. A PC or Mac with an SSD boots faster, launches and runs apps faster, and transfers files faster. Whether you’re using your computer for fun, school, or business, the extra speed may be the difference between finishing on time and failing.

Best Storage for You :

So, does an HDD or SSD (or a hybrid of the two) fit your needs? Let’s break it down:
HDDs
SSDs
Share
Facebook
Twitter
Pinterest
WhatsApp
Previous articleThe Top best smartphones of 2020: 5G powers the top contenders
Next articleiOS 14 Released Features and Compatible iPhones